Without Wax bemusing musings of a bewildered brush-wielder

I was ten years old, I had my tongue curled over my upper lip in intense concentration, and I was working on a drawing of a hockey player.  Leaning over my kitchen table, my lucky number 2 pencil sharpened finely, I worked for hours to get the stenciling on the back of the hockey player’s shirt.  I was plodding along, thoroughly enjoying myself, when my dad came in the kitchen.  He had just come back from work, covered with spackle dust, and he said to me “What a wonderful drawing!  Incredible!  Amazing!  Kevin, do you have all of the supplies that you need, in order to draw or paint?”  I told him that I really wanted a pencil set, with pencils that ranged from light values to dark values.  He said “Let’s go now then.  Let’s go to the store this second.”  We jumped in his truck, and headed to Smithaven mall.  Wandering around, I eventually found an art supply store.  He bought me a pencil set, and oil paint set, and anything else that I even hinted at needing.  Twelve years later, my wife, my mother-in-law, and my father-in-law would all come to pick up the torch.  Each of them encouraged me, assured me, stood beside me, and helped me to spend several years studying painting in Italy.  Were I to list all of the ways they continue to enable me pursue my painting career, I think I would sprain my finger typing.

Every Monday, I teach classes on Main Street in Riverhead.  The classes are wonderful, I really enjoy the range of people that come through those doors.  Teaching painting in the Renaissance tradition, I’ve watched all of my students grow tremendously.  I’m not the authority on classical art, nor am I the artist who spent the most years in Italy.  But, whatever I have acquired, I really enjoy passing along to my students.

Every Monday, as I leave the teaching studio in Riverhead, I get into my truck and head west.  And every single time, I see the tall, ominous figure of the Maximum Security Riverhead Correctional Facility.  It is a massive, cold, terrifying structure, dotted with watchtowers here and there.  It looks just like Suffolk Community College, but with a bit less barbed wire.  As I drive past the correctional facility, I always wonder to myself: who is on the other side of that wall?  How did they get there?  What kind of a world did they grow up in?  How did they come to be there?

When I was fifteen years old, I was walking through the woods of Connetquot State Park.  Out of nowhere, four kids came out of the woods.  Three white kids ran after me, jumped me, punched me, pushed me into the ground, broke my nose.  I looked up from the ground, then suddenly I knew I was in for real trouble… a black kid who looked seven feet tall walked over to me.  He had a mean stare, a vicious, cruel face.  He lifted up his arm into the air, clenched his hand into a fist, and… smashed his friend in the head.  He then picked up his other friend, and threw him across the floor of the forest.  Another kid rushed at me, and the black kid grabbed him by the hair, and smashed him into a tree.  The seven foot tall, black teenager then carefully lifted me up.  He dusted me off, patted me gently on the back, and asked me if I was okay.  I told him I was.  His friends continued to rush at me, and he continued to swat them like flies.  They all eventually left, until it was just me and him.  He kept patting me on the back, telling me he was so sorry, telling me it would all be okay.  The cops eventually arrived, and the guy just walked off quickly and quietly into the thick of the woods.

Somehow or other, the cops found out the name of one of the three white kids.  That evening, they took me in a squad car to the home of  “Vinny.”  His father came out on the lawn, in a filthy shirt.  The house was disgusting and falling apart, the gutters hung down from the front roof.  The yard was covered with garbage, cars were parked on the front lawn.  Vinny came out, and I identified him to the police officers.  He had a look of terror and fear on his face.  I went home that night, and felt so sad for him.  He was so angry, so hateful, and… so filled with hopelessness.  I came to understand that Vinny never had a father who took him out to buy art supplies.  The father never cared enough to find out what gifts his son had.  The police officer in the squad car told me that Vinny had been in trouble since he was nine.  He was caught with spray paint at first, then with cigarettes, then with mild drugs, then hard drugs.  The police officer was visibly sad, said that Vinny was now in a gang, and that he was probably going to be incarcerated in a juvenile detention center.  He said that, eventually, Vinny would either end up dead, or land himself in prison.  Vinny was just fifteen.

A couple of weeks ago, I called up the Riverhead Correctional Facility, and proposed a few ideas to the secretary who answered the phone.  She put me on with the next secretary, who put me on with the next secretary, who put me on with the secretary of the warden.  A few days later, I was sitting at the desk of the warden of the Maximum Security Riverhead Correctional Facility.  I told him my idea:  I want to exhibit paintings in the prison, and teach classical painting in the tradition of the Renaissance to the inmates.  The warden’s eyes opened wide, and he responded with a very enthusiastic “Yes, yes, of course, this is wonderful, this is great, of course.  You can do all these things.  Just tell us what to do next.”  I told him that I wanted to order sculptures of Greek portrait busts, charcoal, Florentine paper, canvases, easels, paints, brushes.  He gave an enthusiastic approval to all of these things.  The warden is named Chief Sharkie, and he and I continued to talk for a long time.  Chief Sharkie skimmed through my portfolio, and asked to hang the painting of my wife (the one in which she is pregnant).  He wanted to exhibit it in the maternity ward of the prison.  In this ward, the inmates that are mothers are allowed to be with their children.  The inmates with infants are allowed to have their children live there, where they nurse their children and spend the day with them.  Chief Sharkie believed the painting would really resonate there.   He asked to show the painting of the heavy metal rocker, the painting of Matteo…. and he went on to say that he would like me to do some portraits of the inmates, and that I could have them pose in a studio within the correctional facility.  He cautioned me with the fact that some of these paintings might be damaged, and I’d have to sign waivers.  While assuring me of my personal safety, he also cautioned me with the fact that the inmates are in there for the worst crimes- I will be teaching Renaissance painting to some of the worst gang members.

I’d like to tell you that I am impervious to fear, that I swell my chest and walk forward with a Clint Eastwood confidence.  Actually, I am a little afraid.  But, I am filled with such a joy, a peace, a sense of right… such as I’ve never before had in my art career.  This is where I know I am supposed to be. 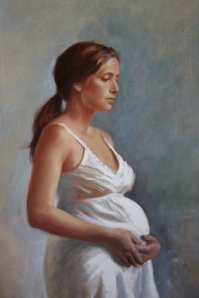 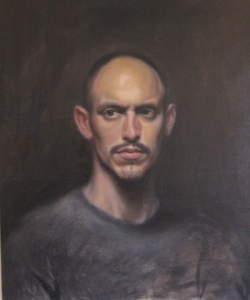 This entry was posted on January 25, 2011 by Kevin McEvoy. It was filed under Uncategorized .